FNIF recognises the contributions of nurses who make a difference.

The International Achievement Award is given every two years to a mid-career practising nurse who is currently influencing nursing internationally in two of nursing’s four domains: direct care, education, research and management. The award accords worldwide recognition of the recipient’s achievements and contribution to nursing internationally.  To find out more about the award including eligibility and the nomination process click here.

The International Achievement Award is given every two years to a practising mid-career nurse who is currently influencing nursing at the international level in two of nursing’s four domains: direct care, education, research and management.  The award accords worldwide recognition of the recipient’s achievements and contribution to nursing internationally.  A commemorative gift and a certificate detailing the award will be presented and the award recipient will deliver a public address to an audience of nurses from around the world.  Related travel and subsistence costs will be included in the award.  An official register of recipients and citations will be maintained.

Note: Members of the FNIF, ICNF and ICN Boards of Directors and any employees of these organisations may not make or support nominations, nor be nominated themselves.

A dedicated pioneer in her field, Dr Liisa Hallila’s interests extend across evidence-based nursing education and service development, organisational ethics, project planning, management and evaluation, teaching and training, and culturally sensitive practice. She has worked closely with a number of countries developing health care systems, including Albania, Bangladesh, Indonesia, Kosovo, Papua New Guinea and Russia and has addressed international audiences on a range of topics.

Ms Eriksson is dedicated to getting nursing care to vulnerable populations worldwide and, in particular, has focused on helping endangered communities during catastrophes and the importance of nursing for populations living in precarious conditions.

As the spokesperson for MSF Sweden she speaks out on the humanitarian values of that organisation and the importance of access to health care worldwide.”

Carol Etherington RN of Nashville, Tennessee, USA, has designed and implemented community based programmes for people living in the aftermath of war and natural disaster, working with Ministries of Health and national staff in Bosnia, Poland, Honduras, Tajikistan, Kosovo, Sierra Leone and Angola.  In her own country, Etherington has received two distinguished awards from the American Red Cross for her work as a volunteer in U.S. disasters.

The health and human rights needs of the under-served worldwide have been the passion and focus of Carol Etherington’s career, and she has made an international impact with her advocacy for vulnerable and victimised populations, including her work in child abuse, ethics, human rights, and with victims of disasters.

In the city where she lives, Etherington forged the path for nursing into criminal justice and social services by initiating programs serving victims of crimes, citizens in crises, social and rescue personnel, and victims of disasters.  In 1975 she initiated the Victim Intervention Program in Nashville, one of the first police-based counselling programs in the United States, now in its 27th year. In national nursing associations, she has served at the local, state and national levels with a primary focus on ethics and human rights.

Carol Etherington is Assistant Professor of Nursing at Vanderbilt University Medical Center in Nashville, Tennessee.  She was the first nurse to serve on the U.S. Board of Médecins Sans Frontières (MSF USA/Doctors without Borders), and was president of the US Board for two years.  She also is a volunteer with the Red Cross in time of disaster and participates in local and regional projects related to refugee and immigrant populations.

Dr Kim has made major contributions to nursing education and practice which have earned her international recognition. She is Professor and former Dean of the College of Nursing Science at the Ewha Women's University in Seoul, Korea and is the Director of the Research Institute of Nursing Science and the Chair of the Psychiatric-Mental Health Nursing Division.

In the field of mental health, Dr. Kim used qualitative research methodology to develop eight interpersonal caring techniques for improving self esteem. The techniques have been widely tested and proven effective for chronic psychiatric and hospice care patients in Korea.

In nursing practice, she designed and established the first community-based mental health nurse care centre in Korea. The United Nations Development Programme (UNDP) recognised the effectiveness of the centre in rehabilitating long-term medical patients at an affordable cost in Korea and in other developing countries. UNDP supported her pilot project in 1996-98, which resulted in 15 additional community based centres.

She earned her BS in Nursing in 1963 and a Master in Psychiatric-Mental Health Nursing and Nursing Education in 1969 from the Ewha Women's University. She earned a Doctor of Nursing Science (DNSc) in 1978 from Boston University in the United States. Dr. Kim was the first nurse with a doctorate degree in nursing in Korea.

Dr. Kim lectures around the world. She has published over 100 articles and 13 books on nursing. 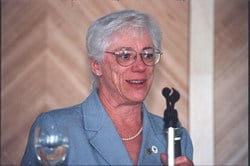 The inaugural recipient of the International Achievement Award, Margaret Hilson has played an active role in international health programmes for over thirty years. She began her career as a community health nurse educator in India and later was appointed by the World Health Organisation (WHO) to a regional training team where she gained first hand experience in Nepal, Thailand and Indonesia. In Central America she worked with a women's peasant farmers' organisation to develop village health programs and with a gold miners' union to assess occupational health and safety issues and prevention strategies.

Ms Hilson is Associate CEO of the Canadian Public Health Association and Director of Global Health Programs where she oversees several programmes including the Southern Africa AIDS Training Programme, the Family Health Project in Malawi and Zambia, and the CAREC HIV/AIDS Programme in the Caribbean. She is also working with the WHO in its global partnership to create a generation of tobacco-free children and youth. Ms Hilson is a member of the Executive Board of the World Federation of Public Health Associations.